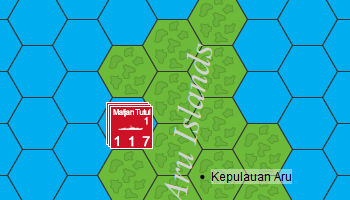 
This is really just an overview of the naval engagement in the Vlakke Hoek bay where the Indonesians attempted to land 150 soldiers in Kaimana.

They were to be dropped off by three torpedo boats, the KRI Matjan Tutul, KRI Matjan Kumbang and KRI Harimau, but were intercepted by the HNLMS Evertsen which was expecting them.

The operation was part of a larger strategy to divert Dutch resources away from a full invasion of Netherlands New Guinea.

This is also a base for developing naval operations (air operations will also be developed elsewhere) to cover relevent scenarios. Currently there is no specific naval combat in place and so its just a base, but I intend to develop this to make naval actions more involved and relevent etc.