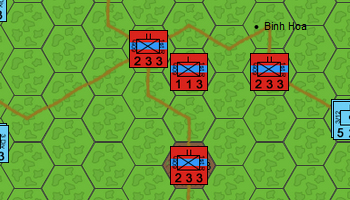 
This is one of the first major engagements of the Vietnam war.

Essentially the US got word that there was a Viet Cong regiment that was poised to attack an airfield and so they did a premptive attack.

I wanted to make sure I had the whole map and built it based on the MCVTHF site but after putting it all together I think the map is too big and I could have used a much smaller one.

The unit sizes are also much smaller than I anticipated, but a map thats too big is better than one thats too small.

I have also yet to really complete the map with varied terain and place names. I understand that a lot of the area was actually cultivated and so far its virtually all jungle, and so I will have to review that but time is limiting so it will probably get left like that for a few days (or years).

I have reduced the size of the 2nd Battalion 4th Regiment Marines to split out some smaller companies. Although the Battalion as a whole is stronger than the other single battalion units I am happier with this as it sort of reflects the overall size detailed in Wikipedia of 5500 men. Even then its sort of short as I generally allocate 500-1000 men per battalion and 4 battalions then is still only 4000 troops and so I dont know where the other 1500 should come from. Compared to the Viet Cong who have 3 battalions and a company which is 1500 at the lower end of 500 per battalion plus a company which is generally 200 men in my thinking, and so the US are probably quite short. however, they do have air power plus artillery, and so hopefully it will work as a reasonable representation of the forces.

I have yet to do leaders although the counter for Lieutenant Colonel Joseph E. Muir has been done, just not allocated.

I should note that I got the book Vietnam Order Of Battle but its not that great. Whilst it appears comprehensive, half of it is one pictures and badges etc and it doesnt specify who was at each major engagement, only were they were generally based on a year by wear account, if that. For example, the section on the US Marines is 5 pages, and that includes and overview of the corp and half a page on the amphibious brigade. For example, for 1st Battalion 7 Regiment of 1st Division it states arrived Vietnam August 1965 (Chu Lai) and left September 1970. And thats it in the entire book. However, it does include engineers, radio, medical, MP, force services, motor transport, service and combined action battalions which is a page in its own right. So its detailed, but not much use for preparing these types of scenarios. Still, its a good solid cross reference. For example, its where I got the Division allocations from as thats not included in the Wikiedia article. I didnt really read the MCVTHF site as time is limiting, but that might shed further light but it seems lower than company level in detail which I try to avoid.