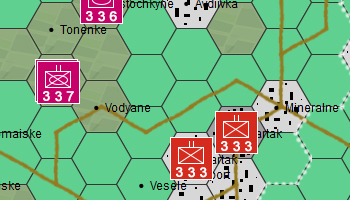 The border marks a very rough guess for the cease fire mark between the Ukraine and the Donbass & Lugansk militias. Either side of that the area is theorectically demilitarised in strip several miles wide.

Their is currently a ceasefire in place under the Minsk II agreement, but there are still regular artillery exchanges on a nearly daily basis.

No one really knows what units where involved and so I have used a small number of general units. This is not a combat style game but rather a limited skirmish. I imagine that the Ukraanians probably retreated after the initial engagement and were really just testing the frontline defences.

My only consideration is that I thought that this whole strip was supposed to be demilititarised, and if so then both sides were probably where they shouldnt have been.