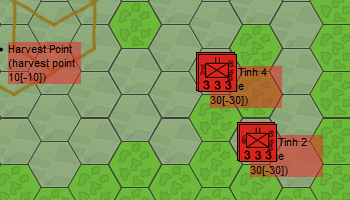 To facilitate this a bit I have added a number of objective points (harvest points) that will represent agricultural harvest rice depots or something. By going from one harvest point to another the US player will end up at My Canh 4 and 2 where they encountered the North Vietnamese.

Like most games this will probably take me forever to complete, so apologise in advance.

I have added the 2nd Battalion 502(I assume regiment) which starts off in Toy Hoa and patrols the basin North of the Da Rang River. Also the 1st Battalion of 2nd Marine Brigade which was Korean patrol the Southern basin area. Im not sure of the numbers and so I have done them both as battalions.

They start on 19 January 1966. On 31 January 1966 the Korean Marines are attacked by the North Vietnamese 95th Regiment and although they are not defeated they suffer heavy casulties and are relieved by the 1st Battalion 502. However, how do you reflect that in a little game like this? Well, thats up to you. You could argue that if the Koreans are never forced to suffer heavy casulties that the 2nd Battalion 502 dont come into play. Its complex, but they will show up on the map on turn 24 (assuming 2 turns per day in this scenario).

Later on 6 February (turn 36) the 2nd Battalion 502 engage the North Vietnamese 95th Regiment at Canh Tanh 4 which is a small hamlet/village. the fighting is a bit tactical but essentially at nightfall the North Vietnamese escape the village through tunnels. However, the next day they are spotted again at Canh Tanh 2 where another battle takes place. Thats as far as I think I can take it as any further is just too far of course historically, in fact assuming anything happens at turn 24 is too far off.

However, the US does get reinforcements for turn 38, Company B and a special forces battalion that you can airlift where ever you want.

After the first night at Canh Tanh 2 the North Vietnamese escaped again through tunnels and there were no more major engagements before the end of the harvest.

There is also be some air support that appears turn 38, but I have limited it to the 13 strikes referenced as I think it might be overwhelming as a game balance.

I hav enot played it as of yet, and it could be that the North Vietnamese  are too strong, im unsure.

Also, no leaders are in play at the moment, but maybe later at some point.