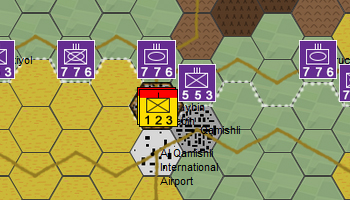 
This is an interesting situation on the border of Turkey and Syria. Similar to the Jizan region of Saudi Arabia, the wars are spilling over close borders with all the consequences that entails although in this case the belligerants are actually formed within Turkey, the Yekineyen Parastina Sivil, who are militia rising up against the actions of the Turkish government.

You can see that Nusaybin Nisebin is right on the border opposite Qamishli which is in Syria.

Whilst the intent of this scenario is just to demonstrate the situation in this part of Turkey, the Lobelog article mentions the PPK's statement that March 2016 would be a Kurdish Spring, ie an uprising of Kurdish people in Western Turkey. Turkey has a long history of fighting the Kurds who dominate the East of Turkey.

What also interesting is that Turkey are fighting the Kurds, and so are ISIS, see Jantrari which highlights the ever confused situation across the Middle East of conflicting loyalties and such a broad range of interest groups.

I have yet to do the units but this is more of an insurgency situation and really more to focus on the geography and events rather than the strategy of the conflict involved. Turkey has about 20,000 troops along the border and a lot of artillery so its probably not about to be invaded, but they are also at the same times cracking back pretty aggresivley which is upsetting the Kurds alot, hence the call for a Kurdish Spring.

Essentially most of the North of Syria at this point is held either by the Syrian Governemnt or the Syrian Democratic Forces (which I dont really know if they are friendly or not as of writing) and that some of Nusaybin Nisebin , the Eastern part is occupied by the YPS, (Yekineyen Parastina Sivil - Civil Protection Units). These units have been raised in responce to the Turkish Governments drive to clamp down on Kurdish calls for autonomy in Western Turkey.

Also, im aware that you cant really see the town names over the two main towns. They are Nusaybin Nisebin  in Turkey, Qamishli in Syria and Al Qamishli International Airport, also in Syria although I doubt its operating as an international airport at the moment.

The video shows Turkish tanks firing into Nusaybin which is described as being under siege.

I have not included the units in Syria as im assuming that this is semi contained in that there is still a border in place and Turkey is not entering Syria etc. There does appear to be a border post between Nusaybin Nisebin and Qamishli.

Also, These units are called YPS and have a red bar at the top, which is to disdinguish them from the YPG who might be the same or might not, but I think the YPG are active in Syria elsewhere but I cant find them.

The picture of the destroyed Turkish Tank, as well as the one firing, would indicated that its pretty intense resistance by the YPS.

Turkish tanks positioned in schoolyards are shelling directly at homes of resident of the Kurdish city of #Nusaybin pic.twitter.com/b4nlb8Yb2R