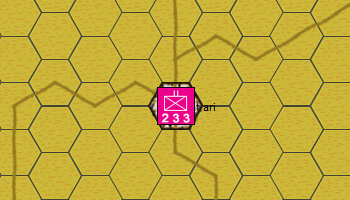 
Simple set up to reflect recent reported assaults by ISIS on Jantrari which is a small village southwest of Ain Issa which itself had fallen to ISI in 2015 but was quickly taken back by the Kurds a few days later.

This scenario is on the frontline between territory marked as ISIS and that of the Kurds. The frontline is approximatly a crescent line running from the top left to the bottom right of the map with Jantrari on the Kurdish side.

ISIS failed to take Jantrari and are reported to have lost 3 fighter trying whilst the Kurds lost 2 fighters.

I think this is interesting because it represents ISIS's interest in taking small villages and highlights the difficulty in defending everything. I am assuming that Ain Issa is far better defended, but if you look at the map there is nothign there. There are larger towns South and Southwest etc and I assume they are under ISIS control, and so it makes you wonder how they define the frontline. Also, the more you look at the map the more you notice small land holdings, quite a lot of them, scattered everywhere. Whilst a lot of focus goes on in villages, towns and cities, I imagine that it must be a fraught thing to live in the rural areas. Anyone doing so would probably be prepared for the worst. I wonder if they stayed or left, and also whether ISIS etc are driving around to all these places and looting them etc?

I did look, but there isnt a Google street view for either Jantrari or Ain Issa available at the moment.