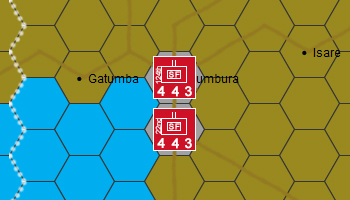 In an attempt to overthrow President Nkurunziza, who was seeking a third term in government, while he was out of the country Major General Godefroid Niyombare declared a coup d'état on 13 May 2015.

They took over the capital and the airport.

By 15 May 2015 the coup was over and on 16 May the coup leaders were in custody and had appeared in court.

It is unconstitutional for President Nkurunziza to seek a third term.

Major General Godefroid Niyombare said that he surrendered due to overwhelming odds stating that he did not want to make a stand and loose the lives of men that had supported him.

The Burundi army looks quite small. Everything other than the SAM units and a few odds and ends has been included.

No idea what units were involved so I have given the Army Faction the special forces and the Government everythign else although it takes a while for it to all enter the game area.

Burundi has a long history of civil war and genocide and has only recently since 2006 or so been at relative peace.