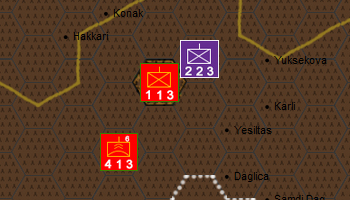 
Short scenario to reflect the latest story of the PKK use of a SA-18 MANPAD (9k38 Igla man-portable infrared homing surface-to-air missile) to bring down a Super Cobra Attack Helicopter.

I dont have much to say really except that the odds of replicating that are not that remote.

However, I was reading another book about the Russians fighting in Afghanistan, see citation below, that said that stinger (USA) and Blowpipe (UK) missiles were common place in that conflict and were responsible for taking out 150-200 Russian aircraft.

As such, this SA-18 attack is nothing new.

The book states that the Taliban penalty for missing 3 times, ie firing 3 rockets and not bringing an aircraft down was death.

Before their introduction in Afghanistan it was thought that their 18 step process would make them too complex for Taliban fighters to use but they were wrong and they were used effectivly in large numbers.

The missiles also effected the Russians ability to supply their outposts and were air drops had been carried out before, supply had to be carried out by road transport and in many cases air operations just didnt happen.

The book falls short of saying that it was the reason why the Russians lost the war in Afghanistan.

Its thought that the SA-18 MANPAD used is one of many thousand that Libya held.

Whats more interesting is why these systems have not been used more widely in Syria and Iraq?

Its possibly the case that Russia are supplying the PKK the systems because they are both fighting ISIS and Turkey and in retaliation for the Turkey shooting down of the Russian bomber.

I cant see it being a game changer unless they had hundreds of them, ie a ready supply and I dont think they are that cheap.

Hakkari Province is in South East Turkey and is pretty much as you see in the map, mostly mountains. The mountains are actually ideal for surface to air missiles as they already have the altitude and can fire at a lower tragectory.